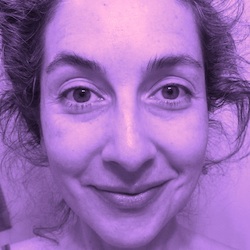 Alex Mitchell lives in Madrid, Spain, in a shoebox. She says she’d like a bigger closet and new neighbors. But all she really wants is time to write her books and make her art. She’s a recovering perfectionist, a proud misfit fashion rebel, and as stubborn as a goat.

“Mitchell’s ability to question every aspect of her own motivations emerges in the often darker subcontext of her pieces.  In projects like “The Monster Series” and “In My Mind” series, she unabashedly explores her identity, putting her self-doubts on display in amusing, yet tortured, forms.  As personal as these pieces are, they are also readily identifiable.  Like a modern, comic reworking of deities from Greek mythology, personal foibles become accurate representations of audience members willing to look inside themselves as well.”

“For me Alex is an inspiring embodiment of the Free Resolute Artist, who will never flinch from the demands and challenges of the Great Goddess of Art, and who will never permit herself to restrain her creative freedom, be it as wild or as crazy as you could ever imagine.  Alex Mitchell is an artist to the very marrow of her bones.”

“Her way of approaching life and art is intimate and playful. The aesthetic she creates is absolutely unique and original, and deliciously immune to the tendencies inside the world of contemporary artistic creation. Alex treads the paths of her own making. The softness of the childish aesthetics in her work is broken and hardened by the sarcastic humour that tints the work.”

“Thinking Inside of the Box: The Exquisite Doodle Artist Project,” artspan.com (March 8, 2013).

Ed McCormack, “Monkdogz Fires a Bold Opening Volley Across the Bow of the New Season,” Gallery & Studio (Vol.10, No.1 - September/October 2007).